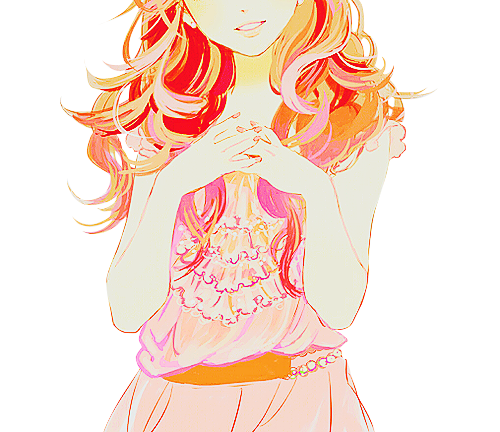 "Evasive human who behaves like a little chihuahua startled by a flying leaf." -Adelard

Mort(imus) — And Death shall be no more.

Mort is... Well, according to him, he's the personification of Death. To me? Well,... Sometimes, when he visits, he brings pancakes (or waffles), bacon, and chocolate for me. He's more like... An aunt! Or, a really bad baby sitter, seeing as he lets Pestilence torture me to death.

For some reason, he's been pretty adament about not letting me drink... But recently he let me have some hot cocoa with a little bit of rum in it. I wonder what made him change his mind...

An information broker and a general pain in my ass. This blondie is a... blonde woman with a frilly hat. I met her in this mansion and I distrusted her, with her polite smile and her eerie likeness to another blonde I've seen around from time to time... But I think she's more like the Roceri, she's only kind of what she appears to be. Through several talks and exchanging advice, I've realized that I can trust this resident. Not with my life, but maybe one day.

I wish her all the happiness in the world...

I don't know... He's brought me cakes and he saved rescu is Alrich. [There's a full page of scribbled out remarks, written hastily and likely just as quickly scratched out.]

Plush dolls small enough to fit in my hand that are mischievous and sneaky, like the woman I believe they were made to look like, Rosery. They've tried, many times, to dye my red hair blonde with little success and have a habit of falling into my liquor...

This guy here is Evil. I threw Mort's skull at him o n e  time and suddenly every time I see him, he's throwing his cloak around me —which is full of wasps, angry, mad, stinging wasps— and infecting me with another disease until Mort feels enough pity to spare the time out of his 'busy schedule' to reap me and brng me back to life— until Pestilence does it again.

How can he find it to be so much fun?

Demon. He offered me a deal once...

A sloth-like demon who appeared the same time Asmodeus and Sexaholic did. Of the three, she may be the only one I don't have to worry about hurting me simply for the fun of it— I hope.

My secret harem lover. Baby Throwing Sensei, one day I shall surpass her.

He beat me in chess.

Felix Rehn — How much you wanna risk?

Felix is... someone who keeps to himself, the kind of man you think might one day grow into the old man who yells at kids to get off his lawn and doesn't attend the neighborhood watch meetings because no one invites him because they don't know who he is. But they probably never tried to get to know him... I've tried and I've gotten far enough to know that Felix is either an open book at the public library or an armoured lockbox without a keyhole in sight. He tells you what he wants to tell you, when he's ready to say something, and not a second before... And what I know about him and what I don't know... sometimes hurts. Even just two little words... Have meant nearly as much as every minute I've spent in his company. But they're not the only words I'll remember or the only words that will remind me. Words like red, dawn. Fireplaces, cream, wine. Anda, dolls. Oskar, Stockholm... All will remind me of (S.L) another somebody to miss... Felix, from Sweden, my smiles and my laughter.

Or so I thought... Felix left one day and hasn't been back since.

Yoriko— But you're not beyond repair

The couple. Alpha Alpha (girlfriend?) and Omega Boyfriend. One of Yoriko's sisters and her boyfriend. After the urging of my mother, Yoriko gave me a dagger and handed my training over to this small blonde.... Who wiped the floor with me. At least Wheatley made me some killer spaghetti later.

A dagger given to me for my own protection.

A metal pipe, given to me by Rosery.

Given to me by Alrich.

A glass from the bar, turned gold by Ariza.

Some rum, with a useful effect...

Helping when I asked about multiple hovers!